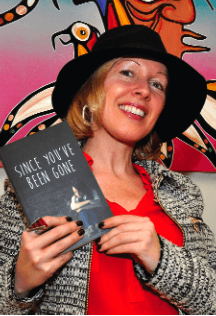 Payne, a Distillery District resident, teaches grades 6-8 at Nelson Mandela Public School in Regent Park. Before that she taught at an elementary school in the Parkdale area.

That’s where a 12-year-old girl arrived in her class one day. “She had been at a multitude of schools in a very short amount of time. She was a bright girl. She made a lot of friends in the short time she was there,” Payne said in an interview.

And then one day, after about six months, her desk was empty. She was gone. “She just didn’t come back to school. All of her books were in her desk. None of the kids knew what had happened,” said Payne.

That started her wondering what it would be like to be constantly on the move, perhaps from domestic violence and being followed. “What were they (the girl and her mom) running from? What would it be like if you could never put down roots,” Payne asked herself.
Domestic violence is an important topic, but it’s not talked about enough, Payne feels. “It is something that pervades every segment of our society.”

Another protagonist in her book is an amalgamation of male students Payne has taught.

It was their character and resilience in dealing with everyday life that Payne wanted to highlight.

They’re “extremely resilient, have amazing talents and potential and the wider society marginalizes them, stereotypes them and still that resilience comes through,” said Payne.

Payne would like to see her students write their own stories. “Their stories are so valuable and so are their voices. It’s important that a diversity of stories is told in Canada.”

Without those stories coming forth, said Payne, “there’s a huge amount of youth potential that’s being lost.”

Payne—a creative person who also paints with acrylics, has acted in London and has other books to her name—likes writing in Distillery cafés and the Paintbox Bistro in Regent Park. “I like to be out writing. I like to be around people,” said Payne.
It seems her book is popular with school kids.

The librarian at Lord Dufferin Public School in Regent Park has said that she can’t keep the book on the shelf, according to Payne.
“I don’t care how many books are sold, if the kids in Regent Park and neighbourhoods like Regent Park are loving this book that’s what really matters,” said Payne.