Posted by: Bulletin Editor April 18, 2011 Comments Off on Did Tories kibosh return of potseed seller?

Marc Emery denied rightful transfer to Canadian prison; were Harperites in collusion to make him serve a greater sentence than Canada would have imposed? 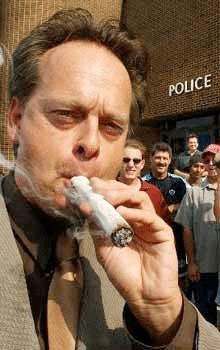 Marc Emery learned April 18 that the United States has denied his request for a transfer to Canada to serve out the remainder of his jail sentence. Mr. Emery has been serving a five-year term imposed after his guilty plea to selling marijuana seeds in order to finance worldwide cannabis law reform efforts.

“This refusal is a terrible affront to the sovereignty of Canada,” said Mr. Emery’s Canadian counsel, Kirk Tousaw. “Marc is a target of political persecution that appears to have transcended his conviction and now infects the treaty transfer process. He qualifies under every relevant factor and should have been allowed to serve out his jail term in Canada, close to his wife Jodie and in the country in which all of his activity took place. We call upon Prime Minister Harper and the leaders of the Liberal Party and NDP to stand up for this Canadian hero and demand his immediate repatriation.”

Mr. Emery’s wife Jodie was devastated by the news. “I’m absolutely shocked and sickened that the United States refused the transfer. Marc has never harmed anyone and has devoted his life to fighting oppression. He has been punished for speaking out for the rights of tens of millions of cannabis consumers here and in the US and it’s truly frightening. Canadians who feel Marc has been treated unfairly with an unjust five-year US prison sentence for seeds should punish the Conservatives in the federal election on May 2nd for extraditing Marc in the first place”

Even the circumstances surrounding Mr. Emery learning of the refusal are peculiar. “It is impermissible under the professional conduct rules in the District of Columbia for lawyers to communicate directly with a represented person, or cause others to communicate with a represented person, without going through their lawyer. Here, neither I nor Ms. Royce (Emery’s US lawyer) were told of the US refusal. Instead, the US apparently told the Canadian Consulate first and it was the Consulate that informed Marc. This is very unusual and should not have happened. It makes me wonder whether the US and Canada are engaged in ongoing dialogue about Marc and lends support to the belief that politics are still influencing the process,” explained Tousaw.

Mr. Emery has the right to re-apply in two years time. His supporters vowed to exhaust every option to secure his swift return to Canada.