Developers have a plot to erode Ontario’s Greenbelt

Posted by: Bulletin Editor October 6, 2016 Comments Off on Developers have a plot to erode Ontario’s Greenbelt

The Ontario Greenbelt Alliance (OGA) released a map highlighting the potential harmful impacts of more than 650 requests, by developers and municipalities to the Ontario government, to remove land from Ontario’s protected Greenbelt.

The map pinpoints just one-third of the 650 requests made by developers, land speculators and municipalities to remove protected lands from the Greenbelt. Just a fraction of the total requests, the portion mapped is almost 11,000 hectares (27,000 acres). The map also shows existing towns and villages in the Greenbelt that could be ringed with more sprawl subdivisions if developers get their way.

“Every Ontarian who values clean drinking water, local food, protected forests, farmland, rivers and wildlife provided by the Greenbelt should be very concerned by developers and speculators trying to pave over the Greenbelt with costly and outdated sprawl,” said Lynda Lukasik, Executive Director of Environment Hamilton. “This new map makes it clear that many in the development industry see the Greenbelt as a target for sprawling subdivisions and highways and are trying to pressure the province to give into their demands.” 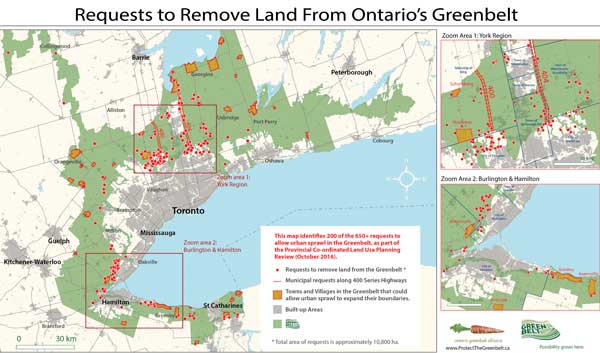 The land removal requests came forward through the provincial government’s review of the Growth Plan and the Greenbelt Plan – a review aimed at improving the laws passed to permanently protect agricultural and natural lands and promote smart development in the Greater Golden Horseshoe.

“Removing land from the Greenbelt piece by piece would be the exact opposite of what Greenbelt farmland, forests and rivers need – permanent protection. Developers don’t need more land, especially in the Greenbelt,” said Erin Shapero, Greenbelt and Smart Growth Program Manager, Environmental Defence. “There is already a huge amount of land available to develop: in the GTHA alone, there is more land already approved for development than the size of Mississauga and Oakville combined. The Premier must ask why developers insist on paving over the Greenbelt instead of developing lands already allocated for future growth?”

While most communities are embracing Smart Growth and the Greenbelt, more than two thirds of all removal requests come from one region – York Region, where land speculators and municipalities are seeking to remove roughly 7,500 ha of land from the Greenbelt, including prime farmland, natural areas along highway corridors and sensitive areas around the headwaters of  important creeks and rivers, including the Rouge and Don which flow to Lake Ontario, a source of drinking water for millions in southern Ontario.

“York Region is where the Oak Ridge’s Moraine Plan and the Greenbelt Plan were born. In the early 2000’s, development pressures, gridlock and rapid destruction of farmland and sensitive ecosystems forced the province to act to protect these important landscapes. The fact that developer pressure is being applied here again speaks to the land speculation that continues to happen as part of the development industry’s attempt to hoard land in the Greater Golden Horseshoe Region,” said Sony Rai, Director of Sustainable Vaughan.

“With climate change bringing more extreme weather and floods we should be protecting more of our vital headwaters and green infrastructure, not paving over them to satisfy the greed of land speculators,” says Jim Robb, President of Friends of the Rouge Watershed.

“The Premier has a clear choice: protect and expand the Greenbelt and build healthy and  sustainable cities, or favour  developers and urban sprawl at great public expense in terms of increased traffic gridlock and taxes, and increased damage to our health and quality of life,” said Jack Gibbons of the North Gwillimbury Forest Alliance.

Download the map here, including detailed views of York Region and Burlington and Hamilton.

2016-10-06
Bulletin Editor
Previous: Barrier-free care for those homeless or under-housed
Next: The Broadview Hotel gets lit