What is the lesson of David and Goliath?

Posted by: Bulletin Editor April 27, 2017 Comments Off on What is the lesson of David and Goliath?

Art Linkletter once asked the above question of a boy on his television show. He received a one-word reply:

The giant Goliath could have used this advice when he fought young David in a story described in I Samuel 17.

Better yet, Goliath could have ducked the judgment of God if he had taken advice from Philip, 11. “Never underestimate the power of God or a boy.”

What Goliaths are you facing? Fear? Loneliness? Rejection? 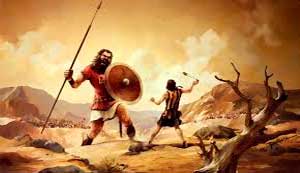 Before giants fall by your sling, however, there may be some warm-up battles you need to fight. “David was a shepherd and a fighter,” says Adam, 10. “He fought animals that came around sheep.

David killed a lion and a bear because he loved his sheep. So when King Saul said to David, `Are you sure?’ David said, `I can belt him,’ and he did.”

Because David had practiced trusting God to help him protect the sheep, David was prepared to trust God in facing Goliath. When we trust God, however, people around us will say, “Are you sure?”

They will offer their own advice as Saul offered his armour to David, and they’ll question our actions.

Family members may be the most scornful. David’s own brother contemptuously asked: “Why have you come down here? And with whom have you left those few sheep in the wilderness?”

Does this sound like someone at the office or at home?

Though Saul offered David the best armor in the kingdom, he decided to stick with what he knew best, his trusty sling. “If you’re going to wear armor,” says Michael, 11, “ask God for the armor.”

Faith in God was all the armor David needed. He boldly declared to Goliath, “The battle is the Lord’s.”

The apostle Paul referred to this kind of faith as a “guard” around the hearts of those who have committed everything to God in prayer.

“Be anxious for nothing, but in everything by prayer and supplication, with thanksgiving, let your requests be made known to God; and the peace of God, which surpasses all understanding, will guard your hearts and minds through Christ Jesus” (Philippians 4:6-7).

No weapon can pierce this armor. Or, as Sarah, 9, says, “Just because Goliath is taller and has better stuff doesn’t mean that he can beat David.”

Trusting in the better “stuff” of technology will not win the battle against one who is shielded by the power of God. Goliath had all the best stuff: bronze helmet, armor, shin guards, a 17-pound spear and a shield-bearer who walked in front of him.

So don’t get sidetracked in battle and become afraid of those with better stuff. Remember the lesson of David and Goliath according to James, 11: “If you believe in God, He will be there for you when you need Him. And He will help you do things you usually aren’t capable of doing.”

Sarah, 10, agrees, “Big people don’t get to do all the big things. If we believe in God, we can do anything.”

But if you’re a giant who’s just out to pick a fight, Melissa, 9, says, “Pick on someone your own size.”

Think about this: Goliath lost his head by trusting in better technology and the false gods of the Philistines.

Ask this question: When you face life’s Goliaths, whom do you trust?