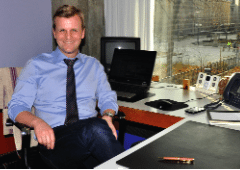 Toronto shouldn’t think of itself as a city divided between its Downtown and the suburbs, says the newest Downtown councillor.

“We need to get away from thinking of just these issues as either downtown or suburban issues. These are Toronto issues. This notion of the urban-suburban divide is not a helpful starting point to the conversation. In the last term of council … the flames were fanned on that by (former mayor) Rob Ford,” says Cressy.

He spoke with The Bulletin just days into his four-year term that runs to November 2018. Although he’s new on council, he’s not new to city hall.

“I’m not new to the chamber. I grew up running around the halls as a kid when my parents were councillors. I’ve been around the council chamber often as an activist on the outside,” says Cressy.

Something that is specific to Downtown, says Cressy, is development pressure and the strain it puts on infrastructure. Two questions need to be answered, he says—“how much development ultimately can we handle and what infrastructure is needed to handle it, physical and social.”

The Ontario Municipal Board often makes planning decisions contrary to the city’s wishes, and Cressy is in step with councillors who want rid of it.

“This is a fundamentally flawed development process. I’ve long believed planning authority should be in the hands of Toronto and that we should be freed from the OMB,” he says.

The move toward a made-in-Toronto appeals board, he says, is a step in the right direction. But he adds that doesn’t change the Planning Act and “the prominence of the OMB.”

Communities must have their say regarding how their neighbourhoods develop and, to avoid OMB interference, developers must be “keen and willing to work” with communities, say Cressy.

“Even in a deeply flawed development process with the OMB our objective should be not to get there because we have a pro-active community-led process to make sure that doesn’t happen.”

About more green space for Downtown Cressy says there are “sites in mind” for acquisition. “We can get new green space. One is around the possibility of acquiring land to develop new green space. That’s possible, albeit it’s expensive in Downtown Toronto.”

Cressy notes that parks are backyards for vertical neighbourthoods. He says the city has to work with developers “to ensure we’re building neighbourhoods, not just adding density.”

Toronto needs to be “creative” to find more green space, says Cressy, and that could mean looking at greening laneways, rail corridors and rooftops.

Cressy says 22% of Downtown households live on less than $20,000 a year. “Inequality is growing. If we’re not confronting inequality and growing as an equitable city by addressing issues of affordable housing then we’re failing,” he says.

Cressy’s western waterfront ward includes Billy Bishop Airport, the site of controversy in recent years with its growth ambitions. Cressy’s against it.

“If we aspire to be a waterfront city … then we have to say no to jets and island airport expansion.”