Correlation between fear and the amount of power people seek

Posted by: Bulletin Editor April 11, 2014 Comments Off on Correlation between fear and the amount of power people seek 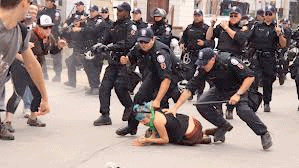 In 1971, George Johnson, a New York City policeman, arrested a man who was in a Times Square office building rifling through coats looking for money. Rather than call a paddy wagon, Johnson walked the man ten blocks across town to his precinct. The suspect accompanied him peacefully. As they walked, they smoked cigarettes and talked amiably. When they arrived at the station, Johnson learned that his arrestee was a wanted criminal with a history of attacking police officers. When asked by fellow officers how he managed to get the man there, he attributed the perp’s placidity to having been treated with respect. I can’t imagine that happening with many police officers today.

America’s police departments are increasing in size and becoming militarized, which is ironic because crime has been on a 20 year decline. America’s police are also becoming more aggressive and bully-like. They are wearing paramilitary garb and gear. They are kicking down doors at the wrong houses, shooting innocent dogs, and routinely beating suspects with enough force to make those who beat Rodney King look like the Dalai Lama. The small town of Doraville, Georgia, a suburb of Atlanta, once celebrated in song as “a touch of country in the city” has even gone so far as to purchase a military tank for its SWAT team.

All of this police brutality is a symptom of a greater problem. My concern is with those who aspire to jobs with built-in power and prestige. I am concerned because I believe that the more power an office holds, the more ruthless – that is lacking in empathy – are the people who are attracted to it. I’m only referring to government jobs and political offices because those positions hold a monopoly on legal force. I am concerned about what may be the motivation behind the desire to hold these jobs. 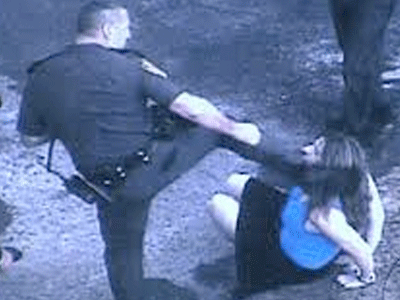 I have been a student of motivation for more than three decades, and I can think of thousands of motivations that tempt us daily: love, hunger, sex, comfort, health, status, and so on. However, the top motivator is fear. It is such a strong driver of our behavior that it may also form the basis for every other motivator in our lives. Fear is a prime motivator because it is rooted in our childhood experiences, and it moves us subconsciously.

David Richo, author of When Love Meets Fear, states, “When we notice a connection between our present fears and their origins in early life, we are finding out how much of our identity is designed by fear.”

I believe there is a correlation between fear and the amount of power people seek. An individual’s motivation for power is to acquire control over his environment. A certain amount of controlling behavior is a healthy natural survival instinct, but after a point it becomes harmful. When that happens normal survival is no longer the motivator. Underlying the quest for power is fear, and the desire for power is to eliminate fear. The more fearful a person is the more control over their environment they believe they need to feel safe. When they seek out public office this becomes a problem, because those who use power to assuage their own fear, also use fear against others to bolster and maintain their power. Citizens, who are also fearful, support the power-monger to the detriment of all.

The more controlling a business or a government becomes, the more it stifles creativity, innovation, and its ability to adapt to change. I am reminded of my college fencing instructor teaching me how to hold my foil, he said, “Hold it like you would hold a bird, tight enough that it can’t get away, but not so tight that you kill it.

Merriam-Webster offers this definition of Power: “possession of control, authority, or influence over others.” The average person understands that it must be earned. Known as “Referent Power,” it is the ability of an individual to attract followers and build loyalty through charisma, leadership, and management skills. This power, and the prestige that goes with it, is only as good as the individual’s honor and reputation allow.

In contrast, “Legitimate Power” or “Positional Power” is formal authority that is conferred on the holder of the office or position. This is the type of power managers have within a business enterprise; and it is the type of power granted to an agent of the government. Subordinates and citizens must obey the office holders regardless of whether the power is earned or not.

Power itself is not evil; like money, it is indifferent and unbiased in its usefulness to the person who possesses it. It does not make the possessor evil; it is the possessor who uses it in evil ways.

Political and social power is the ultimate form of control. German philosopher, Friedrich Nietzsche, considered the domination of other humans as the exercising of control over one’s environment. Michael Crichton, in his book State of Fear, said, “Social control is best managed through fear.”

Joseph Stalin, Adolf Hitler and Saddam Hussein were all raised by brutal parents who frequently beat them. Growing up, they lived in daily fear. All of them went on to become dictators, who maintained complete control over their people through the use of fear-inducing terror.

The drive for safety through the War on Drugs and the War on Terror is turning the United States into a police state. The founders of the U.S. had experienced the abuse of power and worked to institutionally destroy power by reducing it to a minimum. They did this so that people would be free to pursue their happiness. Unfortunately, over the years, that freedom has been chipped away by people who are motivated by power.

I’m not saying that all agents of government are attracted to power, or that they were abused by their parents. Some, however, may have grown up feeling alienated or inadequate. They may not have been part of the in-crowd at school, or they may have been bullied or ostracized. Fast forward to today, and having the power of their office makes them feel secure.

People who have no legitimate or earned power and live in fear may resort to drugs and alcohol to numb it. Others’ extreme fear have led them to violence in a last ditch effort to achieve a sense of power.

Everyone wants to be free of fear. It is prosperity, however, that is most likely to make people feel secure. Simply having the opportunity to achieve success makes people less fearful. Political and social freedom offer people a safe place to create their own fortune. Even if they are unsuccessful, most appreciate having had the unfettered opportunity, and take responsibility for the effort they made.

Rose Wilder Lane, daughter of Little House on the Prairie author, Laura Ingalls Wilder, was a world traveller who observed many oppressive governments. In contrast, she said, “An American could look at the whole world around him and take what he wanted from it, if he were able. Only criminal law and his own character, abilities and luck restrained him.”

I would like to see an America that once again offers freedom of opportunity, so that our national fear and the growing police state can be abated. Let’s return to the era when Andy of Mayberry represented America’s police!

Robert Evans Wilson, Jr. is an author, humorist and innovation consultant. He works with companies that want to be more competitive and with people who want to think like innovators. He is the author of the inspirational book: Wisdom in the Weirdest Places, and the humorous children’s book: The Annoying Ghost Kid. For more information on Robert, please visit http://www.jumpstartyourmeeting.com

2014-04-11
Bulletin Editor
Previous: Tips on growing daffodils from Canadian Cancer Society
Next: Global banking is rigged for bankers and against you