Posted by: Bulletin Editor April 1, 2014 Comments Off on Cops swarm St. Lawrence N’hood in wake of gunfire: man is shot

A man was shot during daylight hours Monday on the west side of Jarvis Street and managed to flee to Henry Lane Terrace near the Toronto Hydro wall before slumping to the sidewalk with undisclosed but non-life-threatening injuries.

Police swarmed the area and haven’t discovered the shooter. Armed officers searched nearby for signs of the culprit but haven’t made an arrest.

The man walked away after being shot, but was unable to go further.

A local resident, Kevin Scrimshaw, captured some of the action in his camera from an apartment balcony and from the street. 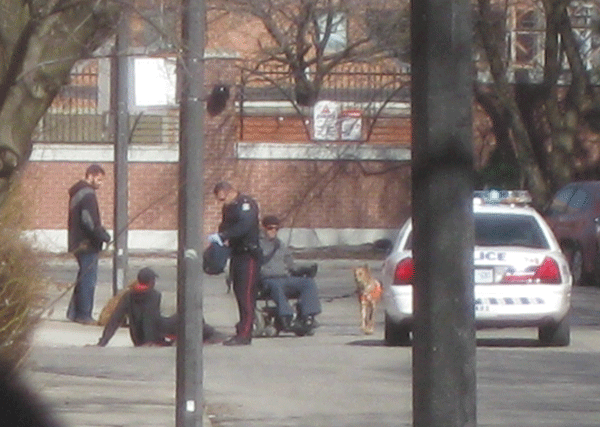 Photo by Kevin Scrimshaw
Wounded man, on curb, is interviewed by 51 Division police after being shot on Monday, March 31.
Suspected gunman is currently at large.

2014-04-01
Bulletin Editor
Previous: Tips for a nomad: your Guide to an Affordable Move
Next: Toronto Police Services Board to hold a meeting on carding