Comstock: The Gardiner should toll for thee

Posted by: Bulletin Editor October 10, 2009 Comments Off on Comstock: The Gardiner should toll for thee 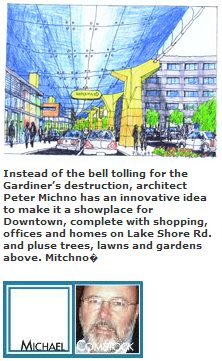 The summer break is over and it is back to the grind. Back to school and back from vacation. Yes, years of the behavioural training based on the school board’s calendar, has set all of us up. We have an incredible desire to get free of routine every summer and get back to business as fall begins. If you step back and look at the CUPE strike this has to be one of the factors. And the city looks like it has a lot business to do, after playing knife throwing games and being the park bully this summer.

A bit of work that began early this summer was setting up a full blinders on study about tearing down part of the Gardiner Expressway. The 2-kilometre eastern piece of the Gardiner that loops down to the Keating Channel holds back a lot of prime waterfront land, but why would you then save the other 5-kilometre piece?

Deleting the section from Jarvis Street east will effectively end the value of the road as an “express” route. Don’t be fooled by this half-truth plan. Cutting off the only artery of its kind will give Toronto a coronary. A diverse transportation plan surely allows for this one express route, especially needed for emergency police and medical transport and vehicles wishing to bypass our Downtown.

The Gardiner is 1950s bridgework with off ramps designed for a DeSoto. It is in need, like an old bathroom, of a total renovation. Last issue we talked about the Les Klein’s 2-deck, green roof plan to re-build the Gardiner. This is positive, creative thinking about utilizing the ribbon of space that runs through town. This week I sat down with Peter Michno, a well-known architectural designer and illustrator and with veteran Downtown architect Stanford Downey, designer of One King St W., one gem amongst others. Peter has worked with him, and as far away as the fanciful towers of Dubai. Peter told us he was stimulated to think about rebuilding the Gardiner when driving a friend into Toronto from the airport. His friend said, “What a wonderful view of the city you have on this road. It gives you a feeling of the size and architecture and urbanity of Toronto.”

Peter has done several drawings of a new Gardiner Expressway; enough that he can feel the catalyzing effect that such a new structure might produce in the buildings under and around it. His design process addresses some of the problems we now see like noise, maintenance costs and the underbelly view. This is one of few bridges that require elegance underneath. Peter’s designs consider the expressway from all angles.

Peter sees this 7-kilometre expressway as an elevated tube with sweeping graceful surfaces. The tube is a vented glass cover and rounded panel bottom, sitting on graceful, colourful supports. Much of the underneath would be office buildings and retail spaces. As a pedestrian it might remind you of Will Alsop’s Ontario College of Art “flying table top.” Peter doesn’t want to get into all of the things that land under the Gardiner could become. The ideas for colour, a bikeway and slower, smaller Lakeshore Blvd.. have been around for years, but ignored.

The green roof approach is becoming universal in its appeal in that it addresses many of the issues we face in the coming climatic shift. As a structure Peter’s holistic design, saves tons of road salt, gives us a bit of green, uses passive solar and maintains the freedom of mobility. A green roofed Gardiner Expressway would be comparable to the CN Tower or Skydome, if not superior to them, as defining a dynamic Toronto.

Peter Michno knows that images speak, often better than words. “Let the drawings generate ideas from the engineers and architects about adding features and solving construction details,” he says. The design’s glass-covered roadway protects the structure from rain and snow and reduces noise. It can also increase safety and allow plantings along the roadway which gives an architectural look and a less industrial feel. While we see buildings alongside the highway now, in this future view we might have buildings under and rising out over the “Parkway Tube,” each with a terrace or solarium, enjoying a dynamic Downtown view. A picture is worth a thousand words (in any language) and Peter’s designs inspire city building.

To begin the new Gardiner the first leg should be the connection to the Don Valley Expressway. (We might take advantage of the old Lever Bros. factory site now sitting empty and bankrupt at this junction.) The section from Cherry Street East can be constructed along the rail corridor before dismantling the old section. That would save two years of detours, and give back several acres for Waterfront development.

I understand from George Smitherman and others that putting a toll on existing roads is not good government. It is taxing something for which the public has already paid. I can agree with this theory, however the Peter Michno or Les Klein designs are for a new Gardiner. We have to learn from the Mike Harris mistake of selling the 407. Tolls producing $300 million a year will pay for it over and over! Here is the opportunity for a new positive image, an image of a “can do” Toronto.