Posted by: Bulletin Editor April 29, 2012 Comments Off on City in conflict of interest over Harbour St. skyscraper: residents demand cancellation

At a recent community information meeting concerns were raised with regards to a conflict of interest surrounding a Tridel 75-storey development at 120 Harbour St., west of York, and Build Toronto.

Approximately 100 area residents attended an information meeting on April 3 at Paws Way Pet Discovery Centre on Queens Quay where the loss of the objectivity of the city, in desperate need of finances, was brought into question. 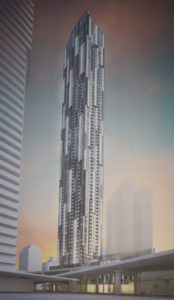 “You have to understand that the partnership is between an organization that is a subsidiary to the City of Toronto called Build Toronto, which is a standalone corporation whose job is to effectively sell vacant city land to try and replenish our capital funds,” explained Councillor Adam Vaughan adding that before the city celebrates any financial gains the impact to communities must be examined. “It’s not the planning department that is selling it, it’s not the planning department that gets asked until an application comes in for comment and where the conflict has been identified is that you have one side of the city saying here are the guidelines and the city is in partnership with a subsidiary saying we want to challenge those guidelines. You have the city standard saying we’ll adjudicate what the resolution of that is and that’s what creates, beyond appearance, what constitutes a conflict of the city’s interest on this.”

The Harbour St. residential tower will butt up closely to the south side of the Gardiner Expressway at York St., with 783 units in addition to retail space—but residents already living in the area told developers that bringing more traffic into the neighbourhood would make the area unliveable.

One visibly angry gentleman from the audience demanded to know if there was any way for residents to halt the development of the massive high rise.

“Rob Ford always said if the community says no then he says no,” Vaughan added at the end of the meeting. “We will see if he stands up for that.”

Information about developments in the area can be found at www.ward20.org.