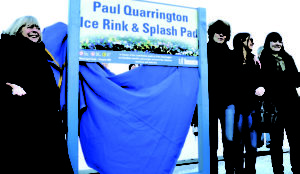 Pam McConnell, left, with Paul Quarrington’s widow Dorothy and his daughters Flannery and Carson at the Feb. 22 dedication of the outdoor rink bearing his name.

The skating rink and splash pad at Sherbourne Common was named after late Toronto writer and hockey lover Paul Quarrington in a ceremony there Feb. 22 with about 100 friends and family present.

Quarrington died of cancer four years ago at age 56. He taught at the University of Toronto and Humber College and wrote seven non-fiction books and 10 novels. At the ceremony actor David Fox read an excerpt from Quarrington’s humourous book King Leary.

Writer Shaughnessy Bishop-Stall lamented about his friend. “It’s a happy day. It’s also a bit of a sad one,” he said recalling how Quarrington died just a couple of weeks before Bishop-Stall’s son was born. He said Quarrington could have taught his son many things about life.

Downtown Councillor Pam McConnell called Quarrington a city builder. “What we want to do in Toronto is acknowledge our heroes and our heroes are people who build a great city,” she said.

Quarrington’s daughter Flannery said the gathering and rink-naming would have pleased her father. “It’s so beautiful and he would have loved it so much. I want to thank my dad for being the greatest father.”

Martin Worthy who played in bands and wrote songs with Quarrington recalled how the writer told him years ago at a rink in the Annex why he wanted to quit his second year of studies at U of T.

“The long and short of it is a writer writes, and he sure wrote,” said Worthy.

Quarrington was also a playwright, screenwriter, filmmaker and educator. He received the Governor General’s Award for fiction and the Stephen Leacock Award for Humour.

2014-03-06
Bulletin Editor
Previous: Ukraine, Syria, Venezuela: Beware the Wars of March
Next: The Myth of Europa: the classic myth retold