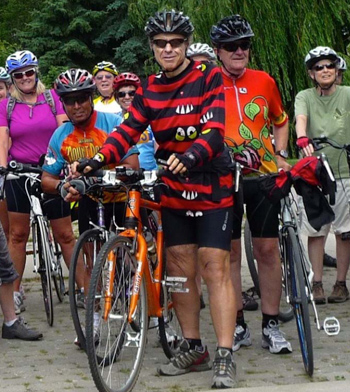 He could be seen on Easy Roller rides and on Tuesday Ravine rides, riding his prized Cannondale X5800 orange hybrid. He was a regular with the Toronto Bicycling Network.

He was born in New York, New York, on March 8, 1949. He spent most of his life in Toronto and was the nephew of the legendary Canadian documentary filmmaker, Harry Rasky. Frank was a writer and editor.

He also worked in the film and television industry in Toronto. Read some of his works on his website http://couragetogrow.com

Frank couldn’t come out to any rides this year, as the cancer made it impossible for him to ride pain free. He will be missed.

2014-11-11
Bulletin Editor
Previous: My nuclear Armageddon and shame as a journalist
Next: Finding the right problem to solve is the innovation challenge