Posted by: Bulletin Editor March 21, 2018 Comments Off on Are Canadians smarter than U.S. regulating guns? 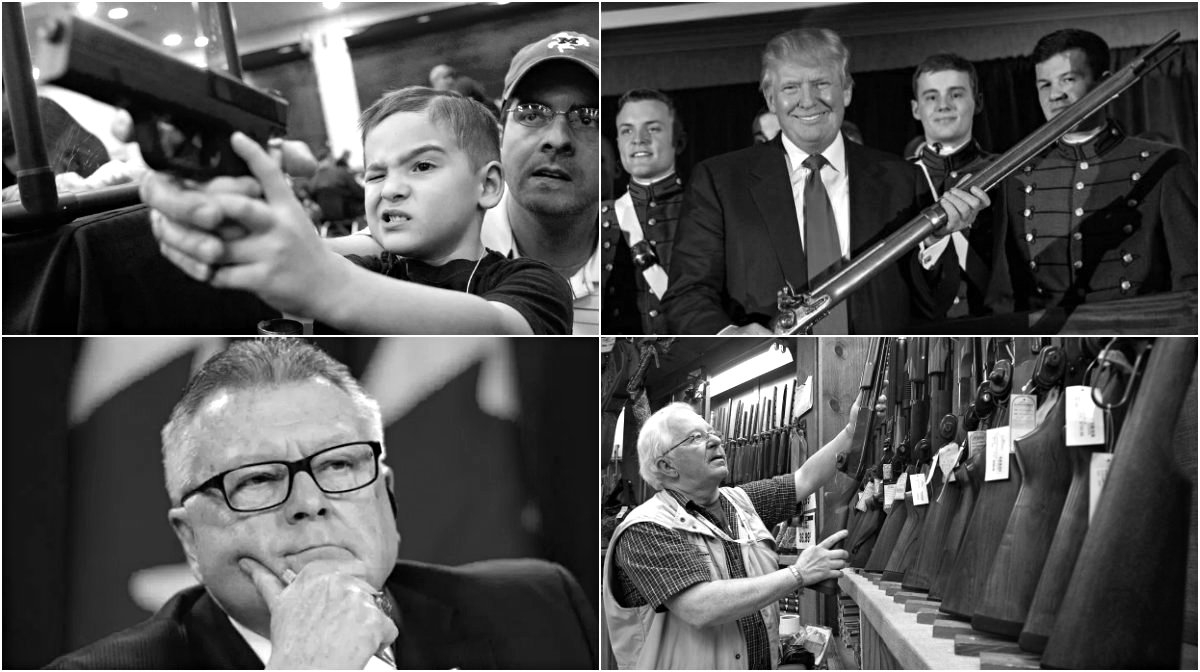 National Observer — Spoiler alert: Oh, hell yes. Canadians are smarter when it comes to regulating guns and protecting public safety. Much smarter, in fact. And, as an American, believe me, I know Americans are, in other areas, every bit as smart as Canadians. If you can make such broad generalizations about a nation, Americans are, in fact, bolder, bigger risk takers, wildly imaginative and high achievers. I love my native land. But when it comes to gun regulation, it’s just a fact that U.S. policymakers let arms merchants call the shots. That’s not dumb, that’s evil.

The first political mass movement I got involved with as an adult was the Million Mom March, where mothers with children and families of all stripes assembled in the mall in Washington, D.C. to protest the lack of response to the Columbine massacre and the growing chaos and legal deterioration of regulation of gun ownership. I stood with my three year old under the hot sun and walked with a crowd filled with victims of gun violence, carrying signs that spoke of their personal tragedies.

Americans are every bit as smart and well-intentioned as Canadians. But when it comes to gun regulation, it’s just a fact that U.S. policymakers let arms merchants call the shots. That’s not dumb, that’s evil.

Now, so many years later, my son is twenty-one, and I live in Canada, and things haven’t gotten better in America in terms of gun control legislation, they’ve gotten worse. Today, however, I am proud to see the country I’ve chosen to live in, Canada, taking measures to protect itself from the radical deterioration of basic public safety that has occurred in the U.S.. Public Safety Minister Ralph Goodale announced Canada would tighten gun controls, and has already earmarked more than $327 million over five years, and $100 million a year thereafter to tackle criminal gun and gang activities.

As part of the plan, Goodale announced new legislation on Tuesday, Bill C-71, that would introduce five new measures to restrict access to firearms, keeping a long-awaited promise made by Prime Minister Justin Trudeau to crack down on gun and gang violence.

“Crime rates generally in Canada have been on the decline for decades,” said Goodale, outside the House of Commons on Tuesday. “But offences involving firearms are bucking the trend. They are becoming more prevalent, especially since 2013.”

For example, he noted that there were almost 2,500 criminal incidents involving firearms in 2016, a 30 per cent increase since 2013. He said there were also increases in gun homicides, cases of gender-based violence involving intimate partners and gun gang violence in that period.

Goodale said the new bill would enhance background checks on people who wanted to purchase guns, as well as the licencing system, setting new requirements for buyers and sellers to produce a valid licence for every transaction. The new legislation would also toughen record-keeping standards for retailers of their inventories and sales, to give police a new source of information during investigations, when authorized by the courts.

Another section of the bill would repeal changes introduced by the government of former prime minister Stephen Harper. The former government introduced policies that allowed it to arbitrarily change the classification of firearms, against the advice of police. This new change in Bill C-71 would ensure that police have more powers to keep dangerous weapons out of the hands of criminals, without interference from the government.

Goodale also said that the legislation would set new restrictions that would require people to get special authorization whenever they wanted to transport guns through a community, unless it was for a trip to an approved shooting range.

When asked if he feared any political backlash over the bill from the gun lobby or even from those who feel the measures are too weak, Goodale said the government has consulted extensively with his own caucus and Canadians in general.

“I’ve had the opportunity to watch this issue for about 40 years and there will be those who will argue strenuously that what we’re doing today is not nearly enough. There will be others who will argue exactly the opposite — that it goes too far,” Goodale said, flanked by his colleagues from the Liberal caucus and cabinet. “We think we’ve got a sensible, practical package that advances public safety, that assists the police in doing the investigations they need to do to keep people safe, and that is respectful and fair in dealing with law-abiding firearms owners and private business enterprises. So we’re hopeful that this will represent a consensus view.”

America is the home of the brave and you really do need to be brave to walk the streets in many parts of the U.S. now. That’s because it’s also home of the free, the TOO free. The business people who make billions from selling guns are far too free. This small force of highly motivated wheelers and dealers have a stranglehold on government, and seem to increase their power year by year, Congressman by Congresswoman, election by startling election. Things got much worse when the Supreme Court declared George W. the winner and selected a president from a family with ties to the Carlyle Group, an investment consortium cashing in heavily on arms sales. Hmm. Interesting the course of events that followed: 9/11, the war against Iraq, the privatization of that war, Halliburton taking control….

But back to the homeland. My Canadian husband tells me, “America will never get rid of its guns.” That makes me want to scream. Never is such a very long time. Can we talk about those moon shots capable of changing everything? The #neveragain movement has just gotten started, it will involve millions, and I dearly hope it will be the tipping point. But, whatever the future holds for the U.S., today Canada’s Liberal government just took a step to make the future safer for citizens.

Good on you, Liberals. Thank you, Minister of Public Safety, Ralph Edward Goodale for leading the charge to further the peace for Canada. Please continue to do whatever you can to tighten the border against the flow of American firearms into Canada. We know that gun violence has happened in Canadian schools and that Canadians are just as violent as Americans. But despite the recent increases, Canadian gun crime is rare and murder happens by other means in Canada; less deadly means.

No assault rifles fired from a hotel room, no mass murders in clubs. Sadly, Canada has seen school shootings, but not at a rate that is vaguely comparable to America’s. That horror is now part of every parent’s nightmares. But I’m not sure our psyches have made room yet for the scale of the American gun tragedy. The only question one can ask is, Why? And for that the answer is grim but simple: because Americans don’t vote out the sons of a guns who protect the access to such powerful weaponry.

Ordinary Canadians simply can’t get weapons as easily as Americans, and this protects the public safety in Canada. We’ve all read the comparisons ad nauseam: in Australia, they made guns illegal after a school shooting, and gun deaths plummeted. You probably know all this as well as I do. So do Americans. My friends and loved ones in Canada try to understand why Americans put up with such an assault on their basic safety. They tell me it’s because of the Second Amendment that Americans are passionate about their right to bear arms. And perhaps this is partly true, but that’s only because of the explosive propaganda campaign waged by the lobbying group for the arms merchants and gun manufacturers. You know exactly who I mean.

Sure, I’ve known people who loved their guns. Growing up in Tennessee the rifle hung in the back of the pick up truck was a common sight in rural areas. These guns were used for hunting, so they said. That’s what they loved. I also remember the teenage boy who lived down the street from me and how his parents wept when he accidently shot his father’s gun off when checking it out, ending his life in that one mistaken moment when the safety catch went off. And I have also heard innumerable Americans argue that the Second Amendment was created at a time when people carried muskets, it took time to re-arm for every shot, and that the Second Amendment should be changed because it is archaic and the Founding Fathers simply couldn’t have imagined the weaponry we have today or meant for the Constitution to be used to protect the rights of young men committing mass murder of children.

Really, Americans aren’t that stupid. But in terms of governance, they’ve stood transfixed like deer in the headlights of this constantly oncoming catastrophe for too long. This American Tragedy is like a play with endless acts, one more heart-wrenching than the last. Just this morning, as I was writing this piece, another chapter unfolded. You never have to wait long for the next terrifying installment in the story of American gun incidents. Two students were shot at a Baltimore high school. Terrence Rhames, 18, told the Baltimore Sun he “heard a gunshot and saw a girl fall as he ran for an exit,” according to the Associated Press. Just another day in the life of America, where the walking wounded inhabit every last square mile.

Yes, today, the Canadian government is making a good effort to protect public safety, and I applaud them.

— Linda Solomon Wood, The National Observer
2018-03-21
Bulletin Editor
Previous: Where to start when looking for window coverings
Next: Let’s lift all Canadians out of poverty