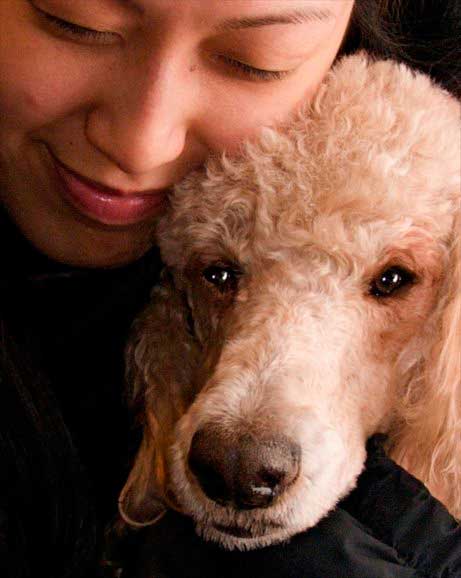 Calypso the poodle was born on April 14, 2004 at the former Torbec Kennels in Bolton, Ont., where I found her mid-May of that year, I guess. She came to live with us 8 weeks later.

She was always whip smart, but didn’t start to show her unusual penchant for being everybody’s friend until we moved to PAL in October of 2006.

After that her wonderful persona became evident everywhere we went. The crossing guards dubbed her “The Queen of the Esplanade,” shortly thereafter. She loved up everybody who smiled her way. Favourite stops on her walks were Main Drug, where she got two treats every day, and when Global moved onto Jarvis that was also a daily stop. She was particularly fond of children, in and out of baby carriages, folks in scooters, people sitting on Esplanade benches and crossing guards. Nobody was exempt. She had hundreds of Facebook friends as well. She was an unofficial Therapy Dog. Two minutes with Calypso, you had a smile on your face.

Biggest trauma was her broken leg, which happened in the dog park on Halloween weekend, probably 2008. She was minding her own business when a trio of labs who were racing around in a wide circle unintentionally slammed into her. She flew into the air and twisted when she landed breaking a bone in her left front leg. She screamed. Never heard anything like it. People who were in the vicinity remember it to this day. I didn’t know if it was a soft tissue injury or a break, actually but decided to wait until the following morning, which was a Sunday, to get her to the Emergency Clinic. So I carried her back to PAL. 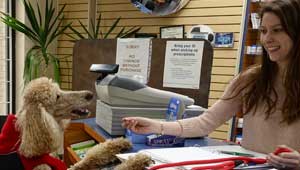 Calypso gets her daily treat at Main Drug Mart.

She was peaceful through the night but was in trouble the next morning. Couldn’t put any weight on her leg. Again – carried her. Down to the car this time and sped off to the Emergency Clinic on Yonge, near Davenport. Xrays confirmed the break and the vets thought surgery and pins might be the answer. I wanted to talk to Dr. John Reeve Newson, Calypso’s great doc at The Animal Clinic on Mutual Street. John thought we might get a better result from splinting the leg and letting it heal naturally. So that’s what we did, for 13 weeks. Calypso never looked back. She hopped along on 3 legs with her purple-swathed leg poking out in front of her, still getting loved up every minute or so. When the splints came off 13 weeks later, she limped for two or three weeks and was then absolutely good as new forever—which came to an end Jan 7, 2017.

Calypso would’ve been 13 in April. We will not see her likes again.