Book launch: We Still Demand! Redefining Resistance in Sex & Gender Struggles
Friday, February 3, 7 pm.
Glad Day Books, 499 Church Street (just south of Wellesley).
The paperback edition of the book will for sale.
We Still Demand! recovers vibrant and unsung histories of sex and gender activism across Canada from the 1970s to the present. Departing from conventional accounts, this book 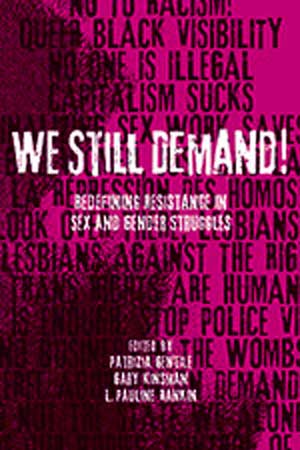 demonstrates the varied nature of resistance and the productive power of remembering sex and gender struggles. In attending to the records and accounts that have slipped out of view, it also redraws the boundaries between activism and scholarship.
Part 1: Histories of Resistance and Activism
Part 2: The Politics and Power of Resistance
For more information on the book go to: http://bit.ly/2hXChlX

About the Book
The first part of the book remembers these struggles. Drawing on a rich history of activism often obscured in existing historical accounts, the contributors recall 1970s same-sex marriage activism; early queer union organizing; organizing against police repression; early trans organizing; the emergence of dyke marches; the organization of black queer space at Toronto Pride events; and the shift from a focus on liberation-oriented activism to rights-oriented activism. The second part of the book rethinks past and current struggles and, in so doing, challenges the current boundaries of sex and gender activism and scholarship. The authors address gender “passing” in historical research; lesbian s/m porn; sex-worker organizing; problems with organizing against “human trafficking”; queer immigration and refugee struggles; borders; and trans identity.
About the Author(s)
Patrizia Gentile is an associate professor of human rights and sexuality studies at the Institute of Interdisciplinary Studies at Carleton University in Ottawa. She co-authored The Canadian War on Queers: National Security as Sexual Regulation and co-edited Contesting Bodies and Nation in Canadian History.
Gary Kinsman is an activist and a professor emeritus in sociology at Laurentian University in Sudbury, Ontario. He authored The Regulation of Desire: Homo and Hetero Sexualities, co-authored The Canadian War on Queers: National Security as Sexual Regulation, and was editor of Whose National Security? and Sociology for Changing the World.
L. Pauline Rankin is a professor in the School of Canadian Studies and associate vice-president (Research and International) at Carleton University. She is co-author of Politics As If Women Mattered.
Contributors: Beverly Bain, Mathieu Brûlé, Allison Burgess, Elise Chenier, Shawna Ferris, Patrizia Gentile, Gary Kinsman, Annalee Lepp, Nicholas Matte, Bobby Noble, Fabien Rose, Cynthia Wright, Andrea Zanin.By recovering the history of activism and outlining contemporary challenges, We Still Demand! provides a vital rewriting of the history of sex and gender activism in Canada that will enlighten current struggles and activate new forms of resistance.
gender activism 2017-01-09
Bulletin News

Previous: Sadie Buck with The Hey He Yays Jan. 21
Next: Our health mismatch between research and care