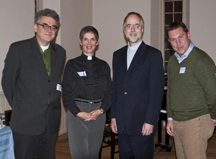 In days of yore in Old Toronto, when only the affluent elite were able to afford pew fees at the magnificent St. James cathedral, such prominent citizens as Bishop Strachan, William Gooderham and Enoch Turner helped finance the little church for the common man.

A century and a half later, at a recent information evening and reception at Little Trinity church, churchgoers and interested members of the public got a preview of what is in store for the historic, three-building campus at the corner of King and Parliament streets.

The central focus of the redevelopment plan is the historic but derelict building at 399 King St. E. When completed, the building will serve as additional space needed to serve the current congregation with room for future growth.

Downtowners are familiar with the strip of large, vacant townhouses on the west side of the church property. They were originally part of a row of workers’ townhouses built along King St. during the 18th and mid-19th centuries, and had been used as residential dwellings right up until 1985.

At the Nov. 21 public meeting, they were introduced to the parish’s plans to revitalize the now-derelict buildings.

The property in its current condition.

Lobko and his team at du Toit Allsopp Hillier are known for such socially responsible designs as the Evergreen Brick Works and the Wychwood car barns restorations. His presentation featured an 1894 map showing the area surrounding King and Derby Sts., filled-in at the time with rows of workers’ townhouses.

The audience also had an opportunity to view computer-generated renderings of the proposed renovations.

From a heritage perspective, they plan to go to committee for five variances. The requests “are modest and historical” and the process will require an archaeological study of the site, to be performed soon. The site plan application has been submitted and, according to Lobko, “the city responded back in a favourable way.”

Lobko’s concept envisions “a new building emerging from the back of an old building.”

According to the architect, the structures behind the facades—built around 1850—are not salvageable. In renovating the old townhouses, he warns, “there is risk, but a highly desirable outcome” if the plan to engage experts and a construction manager who understand the historical restoration process is successful.

John van Gent chairs the Little Trinity building renewal team. His presentation started with the beginnings of the process: “We sought partnership with the community [on] what to do with the spaces.”

He says the plan is for a heritage restoration of the original storefront. The plan also calls for a ground floor meeting room, a reception area and administrative offices, and a small kitchen. The second floor will include a large multi-functional conference room, a kitchen and a reception space that overlooks the adjacent park. Finally, the basement will feature a dedicated gathering space for youth, lockers and showers for guests and needy visitors, along with some storage space.

King suggested possible community uses for the new space, in addition to church functions. It will be available for events such as weddings or art shows, but “no casino,” warns King.

One local resident asked about LEED certification. Lobko explained that LEED “ascertains a level of sustainability, and is not commonplace, but certainly on the rise. The principles in LEED become inherent to what we do as a profession.”

He also warned that the LEED compliance process increases the costs anywhere from $40 to $100 thousand. He later confirmed, “The church is very interested in building in a sustainable fashion, and we intend to do so, but a LEED certification will not be pursued given the significant additional costs related to the LEED process. We’d rather focus available resources on constructing a good building.”

A building owner from across the street expressed his elation with the church finally improving the unsightly buildings at 399 King. He, like other savvy local business-owners, realizes the potential of the neighbourhood and already sees changes occurring. “A lot of people [are] coming here.”

The community is increasingly aware of the impact of West Don Lands redevelopment and the construction of the athletes’ village for the 2015 Pan Am Games. The proportionately denser population in the surrounding area could mean a larger and more vibrant fellowship for Little Trinity in the future.

John Nicholson works out of the 417 King St. administration building and has been on staff at Little Trinity for ten years. He is excited about the new developments and also anticipates changes in the community. Nicholson takes the big-tent approach: “It’s a vision for what’s coming. We have to be prepared. It’s about connecting in better ways and to have a facility that is more welcoming.”

Funding the reconstruction has been an ongoing endeavour at the church. Members, friends and supporters were asked “to make a meaningful and proportionate gift over a five-year pledge period.” The church has already achieved a sizeable portion of their fundraising goal of $3,475,000. In addition, the Anglican Diocese of Toronto has contributed $1 million towards the renovations.

Development is slated to commence as early as next year. Van Gent adds, “We should see activity on the townhouses by the fall and well underway in 2012.”