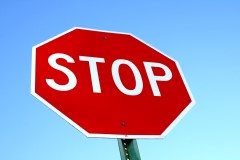 Cyclists who don’t obey stop signs and roll through intersections were on the minds of Bathurst Quay residents when they made a safety audit of their neighbourhood July 11.

At Queens Quay and Little Norway they weren’t surprised to see cyclists—even with a police officer present—sail through the intersection, ignoring the word “stop” in bold print on a large blue square painted on the pavement.

Walk leader Trevor Osborne said speeding cyclists were among the residents’ major concerns. “Bikes are going too fast. They’re not stopping at the stop signs. That was the biggest thing we talked about,” Osborne said.

One woman, with a small baby, said that along the bike-pedestrian path some cyclists get angry at the pedestrians. However, there is no separate path for pedestrians.

One resident, whose balcony overlooks Bishop Tutu Blvd., spoke not only of traffic concerns but late night, noisy neighbours on hot summer weekends.

“A lot of the residents of these townhouses, they use the street as their outdoor living room,” she said. “On the weekend they’ve gone to 2 or 2:30 (a.m.).”

A bend in Bishop Tutu Blvd., she said, makes it hard to see vehicles approaching. “It’s dangerous for the people. They drive down here, they come around this corner and boom, there’s 15 people in the middle of the street including children, and it’s after dark.”

Cressy said in an interview that traffic is an “on-going” issue in Bathurst Quay. “Broadly speaking it’s still a very safe neighbourhood. But there are improvements (to be made). Traffic is a huge issue.”

Another issue involves sidewalks, he said. “How do we make sure the sidewalks are obstacle-free, especially for people with accessibility issues?”

Osborne said a debriefing meeting will be held to list major concerns “then decide who this information needs to go to, whether that’s municipal or whether it goes to the police.”

“I think community members were happy that we’re taking this approach. Their voices matter,” Osborne said, suggesting another safety walk audit could be done in the fall when the neighbourhood gets dark early.