Riverside businesses welcome a new development that would bring pedestrian traffic to Queen St. E. near the Don River bridge, but some residents worry about gas emissions coming from the “car mall” that would be part of the project.

Streetcar Developments is proposing 880 rental and condo units, retail space including a grocery store, a park and auto dealerships for 661-677 Queen E. and 77-79 East Don Roadway.

Called Riverside Square, the project’s four taller buildings—ranging from six to 19 storeys—would be concentrated in the centre.

Queen St. next to the Don River needs more shops and businesses to attract more pedestrians there, said a letter from the Riverside BIA board to Toronto community council at its Nov. 10 meeting.

“For many years (it) has lacked an animated street frontage,” says the BIA. “We feel that Streetcar’s application for Riverside Square will revitalize this section of the community and improve amenities, and opportunities, for a dynamic commercial and residential life that is fitting with Riverside’s existing character.”

But residents who spoke and sent letters to council raised worries about the project’s density, height, increased traffic at Broadview and Queen, pressure on public transit as well as on water and sewer services and fumes from the auto dealerships.

One letter writer suggested that adding more car dealerships is creating “an auto ghetto” in the Riverside community. Another said the “highly stressed” Queen/Broadview intersection would become less safe for pedestrians, bicycles and cars as a result of the increased population.

A city staff planning report says most of the current air pollution in the area comes from the Don Valley Parkway. Also, it says, access for residents and the auto portion would be “mostly separated” with residents using one route and the dealerships another, an indication that fumes would be kept separate from dwellings.

The dealerships’ auto storage, parking and maintenance bays would be internalized “ensuring (they) have limited impacts on the residential units,” says the report.

About public transit, the report says the TTC is in the midst of replacing its streetcar fleet with light rapid vehicles (LRVs) that are longer and hold more riders. The ones for the King and Queen routes are to be in place by 2018.

Les Mallins, Streetcar president and founder, told council many useful ideas came out of working groups as Streetcar made its Riverside Square plans. He said the auto dealerships take up less than a one-acre footprint.

Moving adoption of the project, councillor Paula Fletcher also required staff to report to the Dec. 9 city council meeting whether the auto dealerships would contribute “in any significant way to existing pollution” from the DVP. 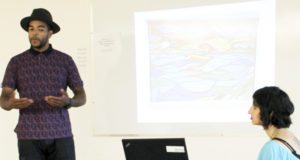 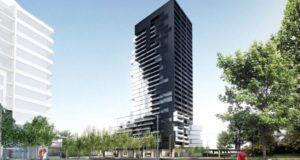 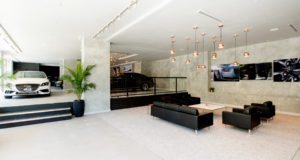