Posted by: Bulletin News December 2, 2016 Comments Off on Bell in Brief: Art deco doorway was first step for women workers 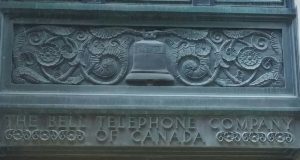 Detail of the Bell Canada entrance. 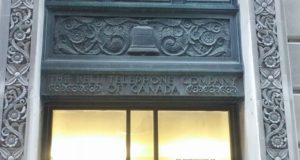 The Bell Canada entrance on Temperance St. in Downtown Toronto.

It was through this gorgeous art deco doorway built in the 1920’s that thousands of young women entered the workforce for the first time. Bell hired 3,000 women working round the clock to be telephone operators.

The Downtown core was then mostly dominated by men and now with women coming on the scene coffee shops and lunch counters were replacing private men’s clubs and beer parlors.

Women were now for the first time being looked upon as a viable hiring option in huge numbers doing other than factory work. Although it would still be decades before true pay equity with men would be considered (still an on going issue for sure) many women in the early part of the 20th century got their first paycheck and a taste of freedom through these doors.