Posted by: Bulletin Staff April 13, 2016 Comments Off on April 18 deadline for comments on Wellesley park 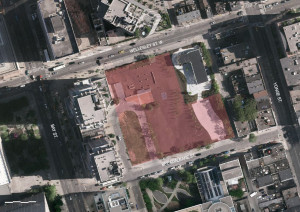 Eric Morse — In early June 2015, residents of the Yonge – Bay – Wellesley area celebrated the kickoff of the development of a new public park at 11 Wellesley Ave. West on 1.6 acres of land originally slated many years ago for the construction of the Opera House. On April 4, following stakeholder consultations, the first concept drawings for the park were presented to about 60 residents at a public open house at St Joseph’s School.

Unlike the proposals for St James Park reported on last issue, which has a strong existing design that in the main only requires updating, Wellesley West starts with a relatively blank slate. It does have some defining constraints. The park is located between the Morguard condo properties at 909-925 Bay and the new Lanterra development at its northeast corner (Wellesley and St Luke’s Lane), and most of the park site is underlain by the parking garages of both properties and a ‘Green P’ garage.

The design team noted that, because the waterproofing membrane of the garage roofs needs replacing every 40 years or so, the park on top would have to be torn up and replaced about that often. This caused a minor sensation until planners pointed out that the average life expectancy of any urban park is also about 50 years before serious renovation is needed. The garages’ real impact is on the sizes and locations of trees that can be planted (tall ones basically only on the Wellesley and Breadalbane edges north and south) and infrastructural features that have to be accommodated in the design (assorted entrances and vents, plus one very large parking entrance and its associated driveway, which extends two-thirds of the way into the park from the south.

The treatment of the driveway attracted the most attention from the discussion groups, as it is probably the single major feature to be dealt with in any design. Two park concepts were presented, not differing a lot from each other except in the proposed design for the driveway. Option Two – the less preferred – preserved the current two-lane inverted U-shape of the driveway, consequently cutting off the land in the centre. Option One proposes a wider, single-lane driveway directly alongside the Bay St buildings, with a small traffic circle just outside the parking entrance. This design would provide the most uninterrupted usable park space.

The small streets – St Luke’s Lane and Breadalbane Street to the east and south provide interesting challenges. The lane is currently just untidy backs of Yonge St shops, but designers foresee it becoming retail or cafe frontage in its own right. Breadalbane St has a school and park on the south side, and there was considerable sentiment for raising Breadalbane to the surrounding grade and making it into a mixed-use pedestrian/vehicle street.

Suggestions from the working groups included clear and attractive fencing or hedging between public and private spaces, a minimum of water features and basketball courts given that these are available across Breadalbane, that there should be a dog run (and, of course, contrariwise that there should NOT be a dog run), distribution of play equipment throughout the park rather than a concentrated play area; indeed, a general integration of uses across the park; public restrooms (properly secured), ‘more glass, less concrete’, free WiFi. There appeared to be a consensus that the park should be a place of peaceful relaxation rather than high-pitched activity.

Andrew Horberry and Bob Fabian of the Church-Wellesley Residents’ Association noted that there seemed to be a great deal of unanimity among the participants on many proposed features and a good deal less on others – particularly the dog park. “There’s a great opportunity here for linking green spaces. The park can provide a linchpin for linking all the green spaces on both sides of Yonge,” Fabian added.

Ward 27 Councillor Kristyn Wong-Tam told the Bulletin that she felt strongly that there had to be a satisfactory balance achieved between green and ‘hard’ paved space – the ‘more grass, less concrete’ preference noted by participants). “Having worked on this for a long time and dedicated so much energy and passion into securing the space for the park, I’m delighted to see how far it’s progressed. I have some pretty strong opinions about what I’d like the park to look like, but the most important thing is what its users think it should be.”

On-line public input to the first round of consultations closed April 18. The results will go back to stakeholders and to the City’s Design Review Panel, then to a second round of public consultations in June. For further information and updates, visit www.toronto.ca/11wellesleywest. 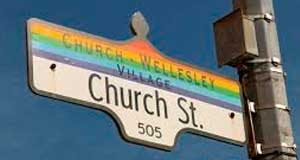 May 5 meeting on 11 Wellesley park design