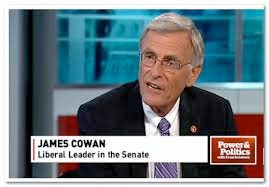 On March 24, 2005, at the request of Prime Minister Paul Martin, I was asked to serve in the Senate. There were nine of us appointed that day: Retired General Roméo Dallaire, Claudette Tardif, Nancy Ruth, Elaine McCoy, Art Eggleton, Lillian Dyck, Bob Peterson, Grant Mitchell and myself.

Two of our number were longstanding Progressive Conservatives and one a member of the NDP. Roméo Dallaire’s continuing contribution to Canada and the international community is widely recognized. Claudette Tardif came to the Senate as a strong advocate for minorities, informed by a lifetime working for the rights of minority francophone communities in Alberta. Lillian Dyck is a scientist who was a professor in the Neuropsychiatry Research Unit of the University of Saskatchewan. She is a proud member of the Gordon First Nation in Saskatchewan.

Each of the senators with whom I was appointed that day was chosen because they provide Canadians with a unique combination of expertise and experience, and deep connections to groups and communities whose voices have not always been heard.

Sen. Dallaire travels across Canada and around the world, advocating for the rights of children forced to become soldiers. He stands regularly in the Senate to hold the government to account on behalf of the many Canadian veterans who call upon him, knowing he will listen and that he understands, very profoundly, the issues they face.

Sen. Dyck has been a determined voice for the hundreds of murdered and missing aboriginal women, demanding that a public inquiry be held to bring justice for their families and communities. On issue after issue, she has worked closely with Canadians who find themselves cut out of the national dialogue, giving voice to their concerns and perspectives at the federal level.

The Senate was designed to do exactly what these colleagues of mine are doing. The House of Commons, whose members are elected, understandably will primarily reflect the views of the majority. The Senate was intended to provide a balance to the potential problems of a “tyranny of the majority,” by providing for the appointment of individuals to represent minority views that otherwise may not be heard, or could be overwhelmed by the power of the majority.

Do Canadians believe that it is important to have these voices represented in the federal legislative process? Whom do they want to see in the Senate, and how do they want those people chosen? What powers should the Senate have — the same as the House of Commons, or different? If there are conflicts between the two chambers, how should they be resolved? Right now, the Senate normally defers to the House, as the elected chamber. If the Senate also becomes elected, which House prevails?

We are long overdue for a serious national discussion about the Senate. The Senate is one of our two Houses of Parliament. Regrettably, its reputation — and that of all of us who serve there — has been terribly damaged by recent events. These events have also prompted more Canadians to question whether the Senate serves a useful purpose. Others ask whether changes could better meet the legitimate expectations of Canadians. That is the discussion that The Chronicle Herald has invited me to join, from the perspective of an active senator for Nova Scotia.

The Fathers of Confederation first and foremost intended the Senate to represent the “regions” (now the provinces and territories) in the federal Parliament.

It is important to recognize that virtually every federation in the world has a bicameral legislature, with a so-called lower chamber and an upper one. (There are a handful of small exceptions, e.g. Micronesia and the United Arab Emirates.)

Some commentators argue this role is no longer needed, as premiers effectively represent their province’s interests to the federal government.

I am not convinced. I appreciate that premiers are more powerful than senators, and when they choose to weigh in on an issue, their voices can have considerable impact. But premiers are busy running their respective provinces, focusing on issues within provincial jurisdiction. Their job is full, without also needing to scrutinize and speak out on all pieces of federal legislation.

And what happens when, as we have seen in recent years, a prime minister chooses not to hold first ministers meetings? Or when a prime minister meets with certain premiers, while ignoring others?

In my experience, it is important to have individuals mandated, as part of their job description, to be the eyes, ears and voice of their province and region, on those issues that come before Canada’s Parliament.

I have seen proposed legislation significantly amended and, though rare, even stopped in its tracks by the Senate, when several provinces wrote in expressing strong objections. I have stood in the Senate along with other colleagues and read into the record concerns of my province and its citizens. We understand that it is “ground zero” of the Senate’s role in the Confederation bargain.

Another important role of the Senate, like any second Chamber, is to be a second “set of eyes” on proposed legislation: the “sober second thought” function.

This can provide an opportunity for further reflection, both after some time has passed from what can be turbulent events that gave rise to a bill, and at a slight remove from the usually more partisan and charged atmosphere of the House of Commons. George Washington reportedly called the U.S. Senate “the saucer that cools the tea.” Our Senate was intended to fulfil the same function.

In fact, this review process has proven highly significant. Over the decades, the Senate has passed hundreds of amendments to bills that have then been accepted by the House of Commons. The different backgrounds and life experience that senators bring to their work, the less partisan atmosphere of the Senate, and the expertise that senators develop because of their longer terms in Parliament, all contribute to the Senate providing a different perspective than MPs.

Does the government of the day always like what we do? No — it never has, regardless of the party in power. We raise serious issues, and identify problems with the government’s policies and legislation that no doubt the government would prefer no one notice.

It was a senator who discovered in 2008, buried deep in an omnibus budget bill, that the federal government wanted to give itself the ability to censor Canadian films.

It was the Senate — in a welcome cross-partisan initiative a few months ago — that stopped Bill C-377, a patently unconstitutional bill that would have forced an unprecedented level of public disclosure of private information about Canadians who happen to work for or do business with a labour union. We succeeded where the NDP failed in the House of Commons. Small wonder the leader of the NDP would prefer the Senate did not exist.

The Senate also produces policy reports (and happily, at a small fraction of the cost of a Royal Commission). Time and again, the Senate has taken on topics that are too controversial for the elected House of Commons — issues like assisted suicide, decriminalization of marijuana, and the future of our health-care system. Senate reports have pushed public debate — and government action — repeatedly for decades. The Senate’s 2002 report on marijuana has been downloaded more than 49,000 times since 2006. It was a Senate report that resulted in the creation by Prime Minister Stephen Harper of the Mental Health Commission of Canada.

I personally believe there is a place for the Senate in Canada’s Parliament, but I wholeheartedly welcome a public discussion about whether we need a second chamber, what powers it should have, how its members should be selected and what role Canadians expect it to fulfil in the 21st century and beyond.

But whether appointed or elected, the character of each senator is key to the success and credibility of the Senate. Honesty, ethics and integrity are part of what Canadians expect from all public servants — it is what we expect our prime minister to demand, first and foremost, when deciding whom to invite to serve in the Senate.

The Senate can make an important contribution, complementing the role of the House of Commons. But any institution is only as good as its members. Those of us who serve in the Senate, who know firsthand the good work that it has done and can do, are the most concerned by the actions of those who betray the trust given to us. “Honourable” is not a title; it is a standard to uphold and live up to, every day.

James S. Cowan, a Liberal from Nova Scotia, is Leader of the Opposition in the Senate.