Allergy season is why I hated picking peaches

Posted by: Bulletin Editor April 23, 2017 Comments Off on Allergy season is why I hated picking peaches

Do you remember the line in the musical “Showboat,” the one that says, “It’s summertime and the living is easy?” Maybe it is for some people. But the worst summer I ever endured was during World War II. We all had to contribute to the war effort and my job was to pick peaches on a farm. But for years I had suffered from hay fever! Peaches and their fuzz were a perfect storm! Could I have avoided this allergy today?allergy season

It’s estimated that 40 million North Americans now suffer from mild to severe allergies. Worse still, for some people, the allergy season never ends. And although there are several factors that trigger these allergic reactions, the main cause is pollen.allergy season

The National Allergy Bureau reports that measurements from 15 to 90 particles of pollen per cubic metre is a moderate level, 90 to 1500 is high and anything above this amount is very high. These levels are more than enough to cause runny noses, watery eyes, itchy throats and to make you feel like death warmed over.

Pollen is also hard to escape wherever you live. One allergy expert in Calgary told me that last summer was the worst experienced in Canada for many years. One day 3,000 pollen grains per cubic metre were recorded in several regions of the country. Such days are good for allergists, but the rest of us would prefer to be living at the North Pole. 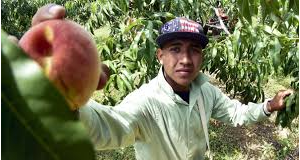 Allergy season is why I hated picking peaches.

So, apart from reaching for Kleenex, what can you do? Some people are lucky that they can move to a better climate. Or have the luxury of staying more often in an air-conditioned environment. But when you’re picking peaches all you can do is rub your eyes, keep sneezing, wish you were anywhere else and hope the day will soon end.

So what creates this hell? Symptoms start when mast cells in the blood release a cascade of chemicals, including histamine, in response to pollen. So, one of the time-honoured treatments has been the use of antihistamine drugs. But these can cause drowsiness, so I might have fallen off the ladder while picking peaches.

Today there’s a good chance I could have worked on the farm without this torment. Dr. John Wilkinson, Senior Herbal Medicine Lecturer at Middlesex University, London, England, says the answer to our toxic world is plant sterols. But, like vitamin C, they are not manufactured by the human body.

Could I have ingested plant sterols to boost my immunity against this allergic reaction? Unfortunately, this is easier said than done. For instance, 3 ounces of unprocessed plant food contains 4200 milligrams of sterols. But when companies convert this into flour, 90% of sterol is lost! It’s another price we pay for civilization.

We can obtain sterols by eating increased amounts of grains, vegetables, fruits, legumes and seeds. Research has also shown that regular exercise can bolster the immune system by stimulating the body’s natural killer cells.

Today, I could also reach for a natural remedy called Immuno-Care available in Health Food Stores. One capsule contains 400 milligrams of plant sterols. It also contains powerful antioxidants with high levels of proanthocyanadins and flavonoids to temper pollen and other irritants.

The prescribed dosage of Immuno-Care is one capsule daily with water or fruit juice 30 minutes before a meal. And to ensure that plant sterols are not destroyed by the acidity of the stomach, Immuno-Care capsules are enteric coated to provide maximum absorption. And there’s an added benefit. This remedy also blocks the absorption of cholesterol.

Today there are more hazards than picking peaches as we all live in an increasingly toxic world. That’s all the more reason for natural remedies, such as Immuno-Care, to help us build up our immunity against pollen, over-processed foods and pesticides sprayed onto crops.

Previous: Three nutrition trends to stay away from
Next: Cold water can kill: Wear protection