A plea to preserve St. Lawrence Centre for the Arts

Posted by: Bulletin Editor September 28, 2011 Comments Off on A plea to preserve St. Lawrence Centre for the Arts 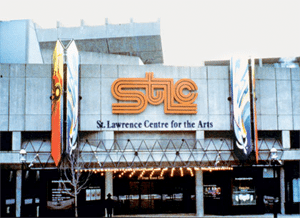 The future of the St. Lawrence Centre for the Arts is unknown during this time of economic uncertainty.  As difficult choices are being weighed at City Hall, it is important for us to participate and shine light on the value of our community’s infrastructure.

After a piece of the city’s infrastructure is built and well used, it is easily taken for granted. We assume that the bridge that was crossed yesterday will be available for our use tomorrow. But soft infrastructure, or a well-established public service, is not secured with physical foundations and can disappear without ceremony.

This is a story about that kind of loss.

In 1970, Toronto’s Centennial Project, the St. Lawrence Centre for the Arts opened two new auditoriums in the heart of the city. One was named The Theatre (now the Bluma Appel Theatre) and the other was named The Town Hall (now the Jane Mallett Theatre).

Inside The Town Hall, there were nearly 500 seats and since it’s opening, these seats were made available on a regular basis for a civic program called the St. Lawrence Centre Forum.

For 40 years, the St. Lawrence Centre Forum welcomed the public to engage in moderated town hall discussions with experts, practitioners, and politicians …for free. Its commitment was to provide a space in the city for freedom of assembly, freedom of speech, and civic engagement.

Over the decades, a broad range of issues have inspired nearly 700 forum events and attracted unique panels that combined new speakers with well-known figures such as Adrienne Clarkson, Bob Rae, David Suzuki, Moses Znaimer, Jack Diamond, Margaret Atwood, and Dr. Henry Morgentaler. They are among more than 40 past panelists who have been bestowed with the Order of Canada and illustrate the diversity of contributors that the forum has brought to its audience.

However, in spite of the obvious value that the forums provided to the city (for which we are still grateful), funding to this program has been indefinitely discontinued and the forum microphones have been unplugged for over a year. Meanwhile,  continued participation in internet commentary and street protests highlight the simple fact that a demand for dialogue still exists.

Teresa Bellefontaine, who was the Forum Director for nearly 15 years, recalls the popularity of the forums and the evenings when she would stand outside on the sidewalk and manage the disappointed latecomers who had to be turned away. The traditional Mayoral Candidate Debates, the Youth Forums for high school students, and the forums with controversial topics like the one titled “Black Youth and Education” are examples of past events that were lively and so well attended, they had to be moved into the adjacent 900 seat theatre.

In contrast, Ms. Bellefontaine recalls other forums that did not attract blockbuster crowds but that she considers equally valuable to the community. As an example, she described a forum about post-partum depression that was organized in response to tragic infanticides that were making headlines. The theatre was only half-full, but the forum allowed a quiet community of families to connect with each other, care providers, and policy makers.

Even with today’s aggressive budget agendas, it is our responsibility to maintain the forum program. Public funding is limited, but it isn’t the only resource at hand. With support and guidance from City Hall and the Board of Management at the St. Lawrence Centre for the Arts, a solution may be possible.

Councillor Carroll, a valued supporter, has emphasized the need for future forums and in particular, its responsibility to serve citizens and Councillors from all corners of the GTA.

Indeed, past forums have even attracted audience members from outside the GTA.  At the forum titled “Politics of Food” rural farmers arrived in clusters and were eager to approach the open microphones.  Their voices, along with many others, were captured by routine audio recordings and constitute an exceptional archive of Toronto’s evolving 40-year-old conversation with itself.

In Councillor McConnell’s words: “It was a place to hear about new ideas, share old stories and take positive action forward.”

And what about breaking today’s silence? We can only rebuild this essential piece of the city’s infrastructure one voice at a time.