Posted by: Bulletin Editor September 12, 2013 Comments Off on 7,411 residential TorontoMLS sales in September (up 30%)

Greater Toronto Area REALTORS(R) reported 7,411 residential sales through the TorontoMLS system in September 2013, representing a 30% increase compared to 5,687 transactions reported in September 2012. Year- to-date, total residential sales reported through TorontoMLS amounted to 68,907 during the first nine months of 2013 – down by one per cent compared to the same period in 2012. 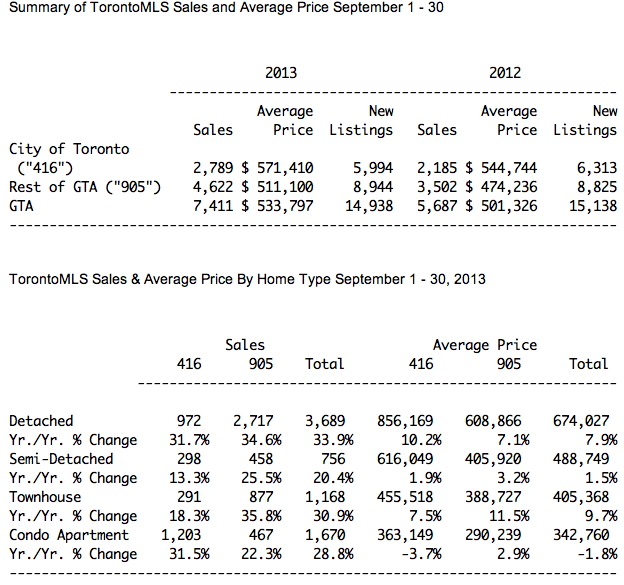 “It’s great news that households have found that the costs of home ownership, including mortgage payments, remain affordable. This is why the third quarter was characterized by renewed growth in home sales in the GTA. We expect to see sales up for the remainder of 2013, as the pent-up demand that resulted from stricter mortgage lending guidelines continues to be satisfied,” said Toronto Real Estate Board President Dianne Usher.

“The price growth story in September continued to be about strong demand for low-rise home types, coupled with a short supply of listings. Even with slower price growth and month-to-month volatility in the condo apartment market, overall annual price growth has been well above the rate of inflation this year. This scenario will continue to play out through the remainder of 2013,” said Jason Mercer, TREB’s Senior Manager of Market Analysis.