Posted by: Bulletin Editor March 8, 2014 Comments Off on $40,000 silver fruit bowl goes to the auction block

A large silver bowl dated from approximately 1906, commissioned by the Household of the Taisho Emperor and created by Hirata Shigemitsu VII (a famous Imperial craftsman), is to be sold at the Fine Japanese Works of Art sale at Bonhams, New York on March 19th.

Estimated at $30,000-40,000, this masterpiece will be sold by the famous international auction house at its auction on Madison Avenue. 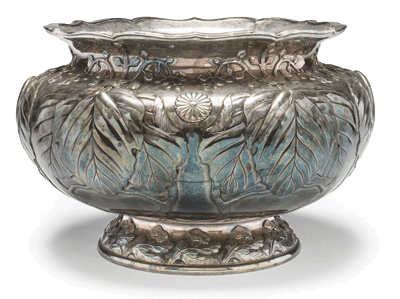 Taisho, 123rd Japanese Emperor, reigned from 1912 until his death in 1926. The Emperor’s personal name was Yoshihito and he was the 3rd son of Emperor Meiji.

This fantastic bowl of double-walled construction was presented in appreciation for Baron Komura’s part in the negotiations and ratification of the treaty of Portsmouth, signed in 1905, which effectively ended the Russo-Japanese War (1904-1905).

Baron Komura Jutaro (1855-1911) was a statesman from a Samurai family, and a graduate of Harvard University.

This unique work of art is decorated with large chrysanthemum and paulownia leaves. The choice of these plants is significant: the highest Japanese order, primarily reserved for heads of state or royalty, is the “Order of the Chrysanthemum”, while the second highest order takes its name from the Paulownia Flowers (“Order of the Paulownia Flowers”) and is mostly reserved for politicians.

The item is accompanied by a letter written from the Imperial Household to the Komura family. This outstanding provenance further increases the great value of the bowl.