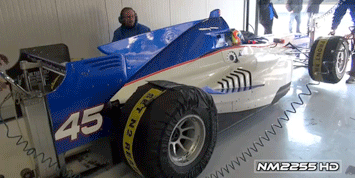 up with the Zele Racing squad at the championship’s official test day in Jerez, Spain.

The combination of Lola BO5/52 chassis and Zytek ZA1348 engine, which produces some

550bhp, will be a significant hike in performance compared to the F3 single-seater he has raced this year. Nevertheless, the 17-year-old from Market Harborough is confident of making a strong impression at a circuit where he scored a podium finish earlier this season.

“This is a massive step up in power, more than double what my current F3 car produces in fact, so I will be treating the Auto GP single-seater with the respect it deserves,” said Twynham. “These cars look and sound incredible, and I cannot wait to get out on track to see what they can do. This is an excellent chance for me to test the car and I can’t thank Zele Racing or my personal management team enough for organising the opportunity at such short notice.”

Zele Racing Team Principal, Michael Zele, added: “We’re really happy to have Cameron with us for official Auto GP testing at Jerez next week. His performances in F3 Open have progressed really well throughout the year and we’re delighted to have another promising and very talented driver in our team.”

To see and, more importantly, hear the Auto GP single seater in action, check out this video:

About Cameron:
Still only 17, Cameron Twynham from Market Harborough on the Leicestershire/Northamptonshire border is one of the brightest youngsters in British motorsport. After making an encouraging single-seater debut in the entry-level Intersteps series last season, 2013 sees him graduate to the highly-competitive European F3 Open Copa Class, a known proving ground on the junior motorsport ladder. Cameron will be driving for revered British squad Team West-Tec who finished as runners-up last season following their double championship success in 2011.