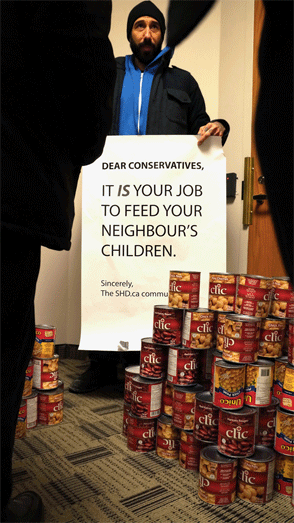 On the morning of Feb. 13, six people used approximately 300 cans of donated food to barricade the entrance to Finance Minister Jim Flaherty’s office. The action was taken in protest of yesterday’s federal budget which failed to meaningfully address economic inequality. The gap between rich and poor is now accelerating at a rate higher than in the United States, forcing 23% more people to rely on food banks than in 2008 and leaving 4 million Canadians without adequate access to healthy food. The majority of the protestors were 35 and under, a demographic that is experiencing an unemployment rate nearly double the national average.

“The Conservatives promised cutting taxes for corporations would create jobs. Instead these corporations have hoarded $572 billion – over half a trillion dollars in taxpayer subsidized profits and raised top CEO wages to 171 times that of the average Canadian worker. Meanwhile they’re increasingly shifting their workforce to precarious jobs,” said Oshawa resident Jim Freeman.

When Conservative staff arrived at the office they were greeted by the nutritious obstruction and a sign that read “It is your job to help feed your neighbours’ kids.” The sign was a reference to a controversial quote from Minister of Industry James Moore who said “Is it my job to feed my neighbour’s kid? I don’t think so.”

“The Minister of Industry’s shocking statement revealed the true heart of the Conservative agenda. They’re real interests are in making the rich richer and ignoring the needs of everyone else. On average, women in this country are still paid 32% less than men despite the fact that addressing such inequality would help the economy and benefit the vast majority of the population.” said  __ year old student Hailey King.

According to the Canadian Centre for Policy Alternatives women on average earn 32% less than men and the majority of minimum wage earners are women. The CCPA states that closing the gap between women and men’s employment in Canada could boost GDP by as much as 8% in the next two decades — contributing an additional $3.9 billion dollars to the economy in 2014 alone. Similar inequality exists with racialized Canadians earning only 81.4 cents for every dollar earned by white Canadians.

The group is demanding a drastically different approach to economic policy, including more progressive taxes and initiatives that cut to the root of growing inequality, such as universal childcare.

The canned food was donated by SHD.ca supporters across the greater Toronto area who were excited by the idea that their charitable donation could make a political impact on its way to the food bank.In May 2013, the SHD.ca community raised over $11,000 for Food Banks in Nunavut and Alberta during a successful campaign to air political ads during CBC’s Hockey Night in Canada. During the 2013 playoff season, the group’s 30-second spots mocked the Harper Conservatives’controversial taxpayer-funded advertising campaign for the Economic Action.

2014-02-12
Bulletin Editor
Previous: Larbre Competition in search of a fresh sporting challenge
Next: Fixing your roof doesn’t have to be a pain