Proposals and brunch: this Sovereign has reigned over all

Posted by: Bulletin News August 5, 2017 Comments Off on Proposals and brunch: this Sovereign has reigned over all

The Omni King Edward Hotel (on King St. just east of Yonge) opened on May 11, 1903 at six a.m. and welcomed its first paying guest, John A. Davidson of Chicago–who had supplied the marble for the hotel–who was shown to Room 459.

The glorious King Edward Hotel was built by men of business to pamper men of business in a time when women not only couldn’t vote but weren’t allowed to pass through the front entrance of the hotel unless accompanied by a male. An early guest booklet stated, “In all things which tend to the comfort and indulgence of the male guest, the hotel is magnificently equipped.”

When the hotel first opened no restaurant, bar, tavern, or dinning room in all of Toronto could lay claim to the title of “most magnificent” than the European Dining Room on the main floor at the King Edward.

When the King Eddy first opened, the European Dining Room, the hotel’s main restaurant, was described in the guest booklet as a “delicate highly decorative room with ivory-coloured plasterwork on the walls.”

The booklet went on to say, “Modestly sized globular crystal chandeliers hung from the ceiling and the room was originally furnished with circular tables each with four refined chairs upholstered in plush green velvet with matching velvet curtains.”

It was in this dining room that the hotel’s architect EJ Lennox used to meet with millionaire Sir Henry Pellatt over lavish lunches to discuss plans to build Sir Henry’s palatial home Casa Loma.

If you visit the main drawing room at Casa Loma today (now a restaurant) you can see a similar ceiling that EJ Lennox designed for the dinning room at the King Eddy.

In the 1920’s this opulent dinging room was renamed the Victorian Restaurant then in the 1980’s it was remolded into Café Victoria. A few years ago it was closed as a dining room and became the Sovereign Ballroom.

The floor of the original European Dining Room at the hotel once had an intricate mosaic tile floor that still exists today under the carpet.

Also gone is the mezzanine stage that once held the hotel’s orchestra suspended above the dinner guests below.

This unique stage was on the left-hand upper side as soon as you walk in where today there is a large air-conditioning duct.

The painting of King Edward VII (after whom the hotel is named) astride his horse that today graces the Sovereign Ballroom was originally just of the horse: at some later date the figure of King Edward was added.

As legend goes Richard Burton proposed to Elizabeth Taylor (the first time) in this dinning room back in March of 1964, an event that made international headlines.

Although no longer a restaurant (except for its lavish Sunday brunches) the Sovereign Ballroom is still one of the most sumptuous rooms in Toronto to stage a wedding, have a meeting or hold a corporate lunch. 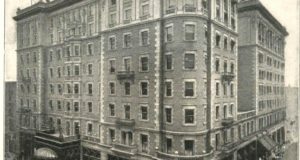 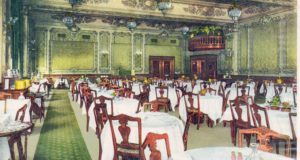 No other dinning room in all of Toronto could lay claim to the title of ‘most magnificent’ than the European Dining Room. 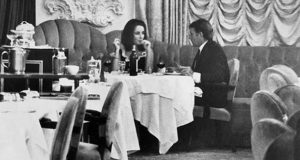 Richard Burton proposed to Elizabeth Taylor (the first time) in this dinning room back in March of 1964. 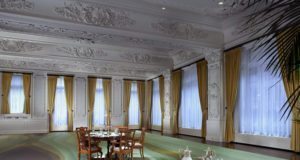 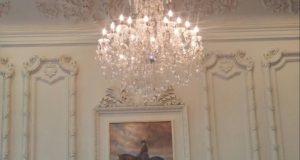 The painting of King Edward VII astride his horse graces the Sovereign Ballroom. 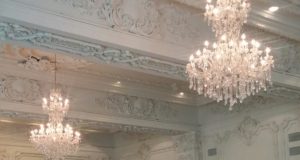