Posted by: Bulletin Editor July 22, 2018 Comments Off on Making sense of Putin-Trump summit at Helsinki

To get a clearer picture of the Trump-Putin summit in Helsinki, it’s important to set aside the lamestream media pile-on against Russia and look at the details.

The monopoly major media in the U.S. are owned by six mega-corporations (aka “oligopolies”) and those have a major stake in war or the threat of warfare in maintaining or boosting the value of their holdings of national defence corporation stock.

Even Canadian major media such as Toronto Star are dissing Putin and citing such ludicrous themes as his alleged annexation of Crimea. We expect that of American media, ruled by monster corporations that thrive on the military arms trade and who backed proven warmonger Hillary Clinton in the 2016 presidential election.

There was no annexation. Crimea has been a Russian territory with a mainly Russian-speaking population. It has been that way since before the creation of the USSR which lumped together Russia and other territories and nations such as Poland, Czechoslovakia and the lot.

After the fall of the Berlin Wall, which rang out the end of the USSR, Moscow shrank from being the overseer of all USSR nations to the lesser role of being capital of Russia as a standalone republic.

It had been a world military power and doesn’t intend to lose that capability.

The West, led by the U.S., promotes the view that Russia—in the personage of Putin—is a villain dead set on ruling and enslaving the world.

Keep in mind that there is not a state of war with Russia and it’s unlikely war will exist because Russia, too, is a nuclear power. Mutual and likely planetary destruction could be the dreaded result of an atomic engagement between nuclear powers.

Russia also has a naval base in Crimea. What it so important that Russia might even go to war to retain the base is the fact Crimea is the nation’s only all-weather seaport. No world-power nation can have a land-locked naval base for part of the year.

Now in the minds of various U.S. leaders is the notion that Russia must accept a secondary position in the world. The Russians—and certainly Vladimir Putin—don’t want that and intend to at least stay at par with U.S. military power.

Given the warfare state America has become, thanks to its politically powerful defence “industry,” Trump is no villain for making peace with Putin and dwelling on other prospects that might benefit both nations and the entire world.

A corporate-run America isn’t the ideal unchallenged world leader. No nation would be. There has to be a balance. And that means a counterbalance. Russia is it. 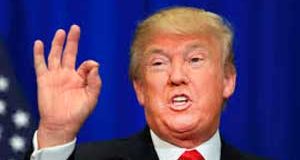 Could Trump save the Canadian dairy industry from itself?