It’s been a little over 50 years since John Fitzgerald Kennedy was murdered by assassins in Dallas. Everyone over the age of reason during that tragedy—notably except for the father of George W. Bush—knows where he or she was when the killing happened.

Mad-Dog-Bush* The Elder says he can’t remember where he was. But witnesses and other bits of evidence say he was in Dallas. Bush just suffers from a bad memory, we are expected to suppose. He was, by the way, at the very top of the U.S. Counter Intelligence Agency (CIA), which many “conspiracy theorists” believe was a key player in the assassination of the president who said he was going to disassemble the CIA and break it into “a thousand pieces.”

On that day everyone but Mad-Dog-Bush The Elder knows where he or she was, I was in Honolulu, serving as an Information Officer at Headquarters U.S. Army Pacific Command, Fort Shafter. Gen. James F. Collins was commander. 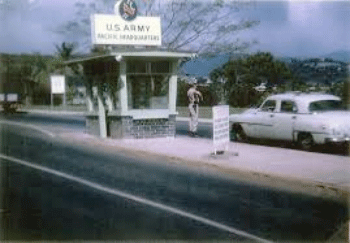 Here’s how I recall that day five decades later and below that is a video I think you’ll find both shocking and illuminating:

The top-secret teletype machine in our office started sputtering and ringing. It seemed as if it would bounce out of the room. A few inky-ribbon characters would appear on the paper roll, then the carriage return would move the print head back to the left as the paper rolled again. Nonsense. Then more ringing.

Quickly it seemed to choke out the words that the president had been hit by gunfire. More spaces, more bell ringing. Soon we got the message that Kennedy had been struck in the head. Quickly we read that it had been a rifle shot. We read that there was more than one location where gunfire was reported.

Senior army officers in HQ-USARPAC wandered around in a daze. Some had tears in their eyes. I especially recall seeing a lieutenant colonel with tears running down his face.

They knew. These were high-ranking army intelligence officers. They knew what it meant, I’m sure. It was an inside job. POTUS, the code word for “president of the United States” — though it wasn’t well known in those days — was taken out, perhaps by insiders.

It was there on that paper roll where I read there were three locations of the gunfire. Not three shots; three locations. Remember, it was a top-level Army intelligence information line. It was the word coming in from intelligence officers and officials on the scene. Tidbits. Rumours. Hearsay. All in real time, sputtering onto the paper roll of our teletype machine and on others at authorized locations around the world. It was there, within moments after the dreadful event, where I first read the words “grassy knoll.” It was a term that would be ascribed to “conspiracy theorists” who would quickly come to doubt the manufactured and hard-to-believe tale around Lee Harvey Oswald. It was also where I read that there was thought to have been gunfire from three locations.

All that was coming in rapid succession.

I also recall reading on the teletype that cops in Dallas had found a bolt-action infantry rifle without a scope in the school-book building. It seemed like a long shot, no pun. The report gave an estimate of the distance from the president’s car. I don’t recall the number, but I did know from my own military experience that hitting a moving target so far away with a scopeless rifle would have been a a one-in-a-thousand shot. Further, getting off three rounds anywhere near the target in a few seconds with the requirement between shots that the shooter operate the bolt and re-acquire the moving target made it impossible. Yet that’s what we would be told is what happened…and that the killer was Lee Harvey Oswald, who described himself “a patsy” before being shot dead in the police station by a strip-club owner who had no history of political activity.

That’s what I recall of that day that has escaped the recollections of George Herbert Walker Bush, father of the imbecilic George W. Bush and the next Bush-apparent, ex-Florida Governor Jeb Bush. The latter whom, we can only pray, doesn’t ascend to the U.S. presidency. Though it no longer seems to matter who occupies the position since the bad guys seem to reign from brutal rapist Bill Clinton to the half-black “I’m-good-at-killing” drone-meister, Barack Obama .

Now watch this. It’s among the best video reports on the Kennedy murder I’ve seen.