Some of the magnificent trees adjoining The Esplanade are falling to the arborists’ axes in defensive action against the emerald ash borer. 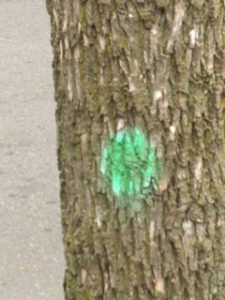 A greet spot means it was treated in time.

Many of The Esplanade magnificent ashes are threatened by the Emerald ash borer. 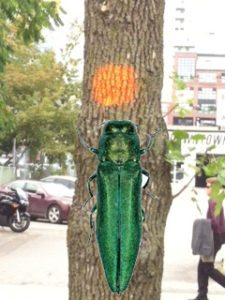 The orange paint splotch means the tree is doomed. Shown a thousand times larger than life, the centimetre-long emerald ash borer is the culprit. 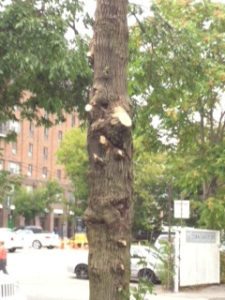 A badly afflicted tree is trimmed to the trunk before city forestry crews remove it.

The Emerald Ash Borer (EAB) which has devastated ash trees in southwestern Ontario and parts of the United States since its discovery in Detroit, Michigan in 2002, has been detected in the City of Toronto. The EAB is an introduced insect pest from Asia that attacks and kills all species of ash (genus: Fraxinus) trees.

In 2007, The Canadian Food Inspection Agency (CFIA) confirmed the presence of the EAB in Toronto in the vicinity of Sheppard Avenue East and Highway 404. Subsequent inspections in 2008 and systematic surveys conducted in 2009, 2010 and 2011 have confirmed EAB infestation throughout the east, north and west parts of the City. (See the City of Toronto Emerald Ash Borer Map).

All ash trees in Toronto are at risk of dying from this infestation. Mortality may occur in as short a period as one year, however, death normally occurs within 2-3 years of a tree becoming infested. The recent tree canopy study estimates that there are 860,000 ash trees in total on public and private lands. The initial areas of infestation detected in 2007 are likely to lose most of their ash trees by 2012. EAB will eventually spread to the rest of Toronto, killing most ash trees in the City by about 2015 – 2017. The City of Toronto has a plan (Link: EAB staff report) to manage the impact of EAB on Toronto`s urban forest. Public education is an important part of the City’s plan. (link: EAB Public Presentation)

As a result of the EAB infestation in the City of Toronto and surrounding municipalities, the federal Canadian Food Inspection Agency (CFIA) has instituted a quarantine zone through a Ministerial Order which encompasses Toronto and most of southern and southwestern Ontario. CFIA Link: EAB Quarantine Zone. The Ministerial Order identifies prohibitions and restrictions of movement on nursery stock, trees, leaves, logs, lumber, wood, wood chips and bark chips from all ash species and for firewood of all species.

Unless authorized by a Movement Certificate issued by the CFIA, moving these products out of the Regulated Area is prohibited. This is necessary to prevent the spread of the EAB into un-infested areas in other parts of Ontario and Canada.
Toronto’s urban forest includes all the trees within the city’s boundaries that provide a wide range of environmental, ecological, social, cultural and economic benefits. Currently, Toronto has approximately 17,000 to 18,000 hectares of urban forest canopy cover provided by approximately 10.2 million trees that are a valuable resource to the city and the people who live, work and play here.

Being coined “a city within a park”, the City of Toronto recognizes its extensive parks, treed and natural areas. This plan identifies the efforts required to achieve a healthy, sustainable urban forest with the goal of providing 40% canopy cover.

2013-08-30
Bulletin Editor
Previous: CUPE Ontario celebrating 50 years of standing up for fairness
Next: Another police execution of disabled/disturbed person, this one in Maryland