A developer has gone to the OMB with a 46-storey, mixed use condo tower proposed for Church and Dundas even though Toronto city planners say it’s in the way of the flight path to St. Michael’s Hospital.

“The proposal is not supportable in its current form. The height … is not appropriate … the proposed tower would intrude into the St. Michael’s Helicopter flight path,” says a planning report.

Toronto community council agreed at its April 5 meeting to send the city solicitor to the Ontario Municipal Board (OMB) to oppose the appeal of a zoning bylaw amendment that would allow for the tower at 215-229 Church and 117 Dundas.

Project owner is Toronto Budget Hostel Ltd. The applicant is Sentinel Church Holdings. The matter went to the board after the city failed to make a decision in time on the zoning amendment application. A pre-hearing is scheduled for July 6.

Community council wants city planners to continue working with the applicant to try to agree on a revised plan. If the OMB allows the appeal and permits the tower then council at least wants some Section 37 benefits out of it totalling $3.9 million.

Funds would go to conserving the heritage component of the Seaton House redevelopment, the John Innes Community Recreation Centre and Moss Park Arena, affordable housing and community and cultural space.

The planning report cites several concerns about the tower. For one, the maximum height for buildings in the area should be in the range of 24-27 stories. The tower would cast inappropriate shadows on the surrounding area, and its sidewalk widths are inadequate.

It also raises issues about the inadequate number of vehicle parking spaces and the lack of family-size units. The proposal has allowed for 178 parking spaces. There would be two 3-plus bedroom units, 170 two-bedrooms, 280 one-bedrooms and 164 bachelors.

The planning report says a pre-application consultation meeting was not held with the applicant. 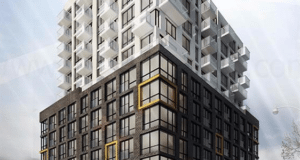 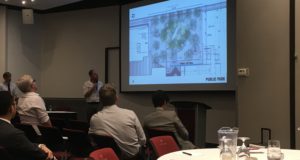